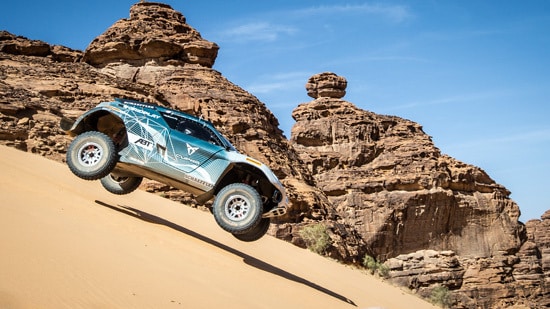 Adam Hay-Nicholls travels to Saudi Arabia to investigate a global environmental campaign disguised as the world’s most exhilarating motorsport.

Adam Hay-Nicholls travels to Saudi Arabia to investigate a global environmental campaign disguised as the world’s most exhilarating motorsport.

You join Cloud in the Saudi Arabian desert, where nature has created a soaring and tumbling racetrack threading its way between vast sandstone rock formations. Marshals have warned me to be careful of snakes and scorpions, and I’ve discovered the skeleton of a long-dead camel metres from the racing line. Approaching at speed is the eldritch hum of a jacked-up EV, a giant dust cloud stretching in its wake.

Extreme E (or XE for short) is motorsport meets The Blue Planet, with a bit of Mad Max thrown in. Imagine Formula One narrated by Sir David Attenborough. The Desert X Prix here in Al-’ula is the first of five rounds in this year’s championship and XE has pledged to leave each venue better than it was found by creating ‘legacy programmes’. In Saudi Arabia, XE is establishing a year-long conservation programme to track and protect the endangered Hawksbill Sea Turtle.

The transport sector, explains Richard Washington, Professor of Climate Science at Oxford University, is responsible for 30% of the world’s carbon emissions. “If we can find a way to clean that up, we’ve solved a big chunk of the problem. We need catalysts that change the minds of the public. Demonstrating what clean energy can do in a challenging environment like this, with snazzy cars running on clean energy, is the sort of nudge you need to make people see things differently.”

Wave of the future

The race paddock looks like the set of M*A*S*H, with the nine teams working out of khaki tents. The cars, known as the Spark ODYSSEY21, are powered by a 400kw (536bhp) battery electric motor. They’re fast-charged at races via a hydrogen fuel cell, the water from which is reused and given back to the local community for agriculture.

The other paddock is floating 200 miles away in the Red Sea. The St Helena is a former Royal Mail Ship which has been refitted to transport the cars and logistical equipment. With 62 cabins, it also hosts the drivers and staff in the days leading up to the race (yes, they have to bunk together, four to a room). The St Helena’s engines are not electric, but they have been converted to run on low-sulphur marine diesel.

The ship has its own laboratory and scientists are invited to take a residency for each leg of the season. It reminds me of Jacques Cousteau’s research vessel, the Calypso. Each evening, guests hear presentations from leading scientists and sustainability advocates in the Tintin Lounge, a drawing room decorated with reimagined Hergé prints that feature the boy reporter and Captain Haddock digging XE cars out of sand dunes or boarding the St Helena in tropical harbours.

Diversity is also at the core of the concept, with each team running both a male and a female driver, the first time this has been mandated in motorsport. The women competing include Britain’s Jamie Chadwick and Catie Munnings. “Normally we girls are all spread across the world in various championships, so it’s really good for so many of us to come together and encourage each other,” says Catie, 23.

The average age of the men is much higher and includes bona fide GOATs Sébastien Loeb and Carlos Sainz, multiple world champions from the rally world. The 2009 Formula One champion Jenson Button is both a driver and team owner, and fellow F1 greats Nico Rosberg and Sir Lewis Hamilton own teams too.

Each session comprises just two laps of the course, one for each driver. The perilous course is split into 10 gates, creating pinch points, and the dust factor means that whoever gets through the first gate first is likely going to lead for the remaining nine. Drivers describe the cars as unpredictable. Mounds of ‘camel grass’ might easily launch a car or tear a wheel off. Deep sand and ruts may flip a car when cornering.

That’s exactly what happens to Stéphane Sarrazin and Claudia Hürtgen. Both walk away from spectacular accidents, which go viral. The final comes down to X44’s Sébastien Loeb and Cristina Gutiérrez against Rosberg X Racing’s Johan Kristofferson and Molly Taylor, and, elevated thanks to ‘Gridplay’ (a power boost gifted by fans and rival teams), Andretti’s Timmy Hansen and Catie Munnings. This is in no small part due to Munnings’ tenacious drive-in qualifying while trailing a tyre. “There was never a question of pulling over. It was, okay, now I’ve got three wheels. In a weird way, I enjoyed it.”

In the end, it’s RXR that’s victorious, with Kristofferson building a mighty lead and Taylor maintaining it. We leave Saudi Arabia feeling very positive about XE. The aim from the beginning has been to transcend sport and race without a trace, so the site is pulled down and all evidence of the event is taken away. The tracks in the sand are padded down by camels ‒ ancient Al-’ula’s more traditional off-roaders.