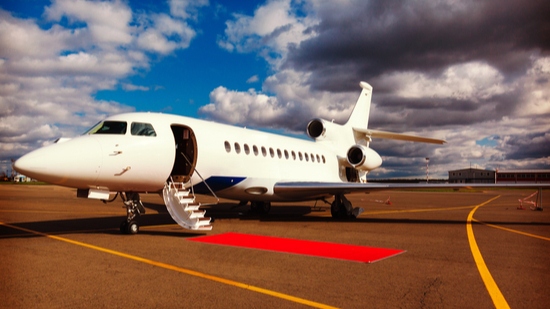 The landscape of the rich and famous is changing and you have more chance these days of flying in a luxury private jet than ever before. We take a peek at what’s inside the world’s five most expensive private jets and the people who own them.

The 5 most expensive private jets in the world

The landscape of the rich and famous is changing and you have more chance these days of flying in a luxury private jet than ever before. We take a peek at what’s inside the world’s five most expensive private jets and the people who own them.

The rise and rise of private jet travel

Forbes’ latest list of the world’s wealthiest men and women threw up a whole load of surprises. There were a record number of billionaires – 2,208 to be exact, from 72 countries and territories including Zimbabwe. The average net worth of individuals in this groups also recorded a record high of $4.1 billion with a total wealth of $9.1 trillion. And the firsts kept on coming with the first ever cryptocurrency billionaires, makers of bridal dresses and electric cars, and 63 billionaires under the age of 40.

Jeff Bezos, who founded Amazon in his garage, topped the Forbes list with a fortune of $112 billion. His private jet of choice is the twin-engine business jet airplane – the Gulfstream G650ER – which he bought for around $75 million. Last year when there was hot competition between cities hoping to host Amazon’s second headquarters (and the 50,000 jobs that come with the honor), the media did their best to track Bezos’s jet flight data to see where he visited most often in search of the best site for his company.

The world’s second wealthiest man is Bill Gates, worth $90 billion. Gates bought a 19-seater Bombardier BD-700 Global Express for about $40 million some years ago. Gates, who constantly jets around the world, has cited demanding security needs for the purchase of the jet.

Lover of all things aviation, and number three on the list, is Warren Buffett worth $84 billion. Buffett, who bought a private jet 20 years ago – a Bombardier Challenger 600 – and then went on to own a private jet operator, says that having a private jet at his disposal makes his life so much easier and saves him a considerable amount of traveling time.

The private jet aircraft purchases of Bezos, Gates, and Buffett could be seen as quite modest in the world of luxurious private jets. If you have the money to spend, there’s an ultra-luxurious and very expensive jet out there for you. So fasten your seat belt for a whirlwind tour of the five most expensive private jets in the world.

Starting off our countdown is a Boeing 757 with a price tag of $100 million. Owned by Donald Trump, there’s nothing shy about this 43-seater private jet that skimps on nothing to make life onboard as luxurious and convenient as it possibly can be flying 40,000 feet above the earth. The jet is powered by Rolls Royce engines and has all the latest electronic equipment onboard, including a personal TV screen for every chair, and a built-in multiplex movie system with a library of over 1,000 movies and 2,500 CDs. There’s gold in abundance too – 24-carat plated seat belts and the family logo stamped on almost everything. For added comfort, the couches in the guestroom convert into a bed.

The Boeing 787-8, also called the Dreamliner, is capable of carrying over 300 passengers. At the European Business Aviation Convention and Exhibition (EBACE) in 2016, Kestrel Aviation Management unveiled the first VVIP outfitted Boeing BBJ 787-8, with seating for 40 lucky travelers. The ultra-luxurious $300 million jet has 2,400 square feet of cabin space with an oversized master bedroom including a California king-sized bed, a walk-in closet, and master bath with double-size shower, and heated marble floors. There is a luxurious lounge for relaxing and dining, and a separate seating area with 18 first class seats and six premium economy seats. While several privately-owned Boeing 787s have been reconfigured into private jets, this is the first Boeing 787 specifically designed to be a Boeing Business Jet. One of these carbon-composite airliners was bought in 2016 by the China HNA Group which spent a further $100 million turning the plane into their version of a luxury private jet.

The longest and second largest airliner ever built (and one of Boeing’s bestselling models), this plane’s price tag excludes the luxury amendments that are fitted post-purchase. The interiors of the private jet are built by Greenpoint Technologies and only the finest materials are used. The private plane has two lounges and a dining room, a stateroom with its own lounge, and a sizable office and state-of-the-art conference room.

One client who bought a 747-8 reportedly spent an additional $200 million pimping his ride with luxury must-haves like fully equipped bathrooms, a private living room and master suite with magnificent views of the changing sky. There’s also a guest cabin with a luxury en-suite bathroom. Other amenities are a private office and generous meeting room, big-screen TVs, two living areas with sofas, and a dining room for 14 people. This long-legged aircraft can hit a speed of 645 miles per hour and has an impressive range of 9,200 miles.

In fact this plane is so impressive that the U.S. Air Force announced in 2017 that the two Boeing 747-200s being used as presidential planes – Air Force One and Air Force Two – will be retired in favor of Boeing 747-8s. To save on the price tag, the Air Force has bought jets originally destined for the bankrupt Russian airline Transaero. Once the jets have been retrofitted with mandatory telecommunications and security equipment, their worth could be as high as $660 million – that’s what it takes to equip an aircraft to survive earthquakes, meteor strikes, nuclear war and terrorist attacks.

Other add-ons are likely to include a mobile hospital with specialist doctors and an operating theater for on-board medical emergencies. The aircraft will be equipped to deploy flares to counter heat-seeking missiles, ECM (electronic countermeasures), and radar-jamming technology, as well as being able to refuel mid-air up to 35,000 feet. The 100-passenger, 26-crew plane has a jaw-dropping 85 phones, 238 miles of electronic wiring, 19 TVs, a variety of computer connections, and two-way radios.

Also the world’s biggest private jet, the Airbus 380 is the aircraft of choice for Saudi Prince Alwaleed bin Talal al-Saud. Singapore Airlines and Emirates fleets own the same model which can take up to 800 passengers, only without the expensive modifications of a Saudi prince.

The double-decker, one of the most expensive planes in the world, is currently listed at $432.6 million. Although the A380 was originally intended as a commercial airliner, resellers are seeing pre-owned A380s being converted to luxurious and expensive private jets. Saudi Prince Alwaleed bin Talal al-Saud did just this when he turned his A380 into nothing short of a flying palace, including parking space for the prince’s Rolls Royce! The plane’s three floors are connected by an elevator and spiral staircase. Four family and VIP suites include a prayer room with electronic mats designed to rotate automatically towards Mecca in the East. For entertainment, there is a concert hall with a stage and a grand piano, and a Turkish bath for a luxurious soak.

According to media reports in 2013, Prince Alwaleed bin Talal al-Saud, who was ranked the 29th wealthiest man in the world by Forbes magazine at the time, sold his Airbus A380 to an anonymous buyer and used the proceeds to expand his investments in Saudi Arabia and the Middle East.

Heading up the list of the world’s most expensive private jets is the fabulous Airbus A340-300 owned by billionaire Alisher Usmanov, one of Russia’s wealthiest businessmen. In its commercial configuration, the Airbus A340-300 can seat over 300 passengers and has a top speed of 567 miles per hour and a range of 8,512 miles. Usmanov’s private jet, named Bourkhan after his father, has four engines and an ultra-long range capable of flying any air route on the planet. While information on the interior is not available, the plane is known to have undergone an extensive retrofit with VIP additions that surpass even President Vladimir Putin’s Ilyushin II-96. You can view an infographic of the Bourkhan in our report on the private jets of world leaders.

The B-2 Spirit is a military aircraft that was launched in 1989 during the Kosovo War where it flew 50 sorties. What sets this fighter plane apart is its design technique called “continuous curvature”. The purpose of the sleek lines is to deflect radar – its radar cross-section is just 1.1 square feet (no bigger than a pigeon). The jet plane can reach top speeds of 0.81 Mach, has a range of 6,000 nautical miles and needs to be refueled every six hours, which contributes to its $135,000 per hour operating costs.

The jet’s long-range capabilities made it necessary for designers and engineers to include a hot plate for food preparation, as well as a toilet and bed so one pilot can sleep at a time on long missions – crucial for minimizing fatigue during round-the-clock flights. As you’d expect, the fighter jet has an impressive collection of techie things like a quadruple fly-by-wire flight control system, split brake-rudders, and differential thrust for maneuver – this maintains a low radar cross-section. The plane’s engines are hidden in the wing to deflect radar and reduce the engine’s heat signature to prevent the plane’s presence from being picked up by infrared tracking systems.

Private jet luxury even when you can’t afford to buy

There are successful people all over the world who are unlikely to reach demi-billionaire status any time soon. But they still have high standards when it comes to traveling comfort and performance. In order to cater for this market, Emirates on its Los Angeles to Dubai route now offers all the luxuries of private air travel, including spa facilities, mattress beds, individual minibars, and fully partitioned private suites. The service is proving popular with both VIP businessmen as well as Hollywood stars and fashionistas. So if you’re a discerning traveler but can’t afford to buy your own expensive private jet, you can still fly like Bezos and Gates. But it doesn’t come cheap – a ticket will cost you $30,000 – believed to be the most expensive airplane ticket in the world.